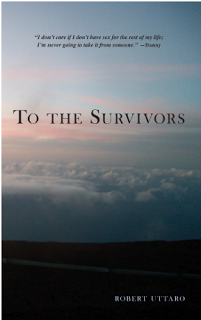 This may sound strange, but I believe I was meant to read this book. I believe this book found me, rather than the other way around.
When Robert Uttaro first emailed me (and a few other book reviewers) about his book To The Survivors, I knew immediately that I wanted to interview him. I was not too sure if I wanted to read the book, as I assumed it would be too hard for me to keep my rage in check if I read stories of sexual assault. No other crime saddens and angers me as much as rape does. But I decided to ask Robert for a copy of the book, because – no, there is no “because”, I really do not know why I went from, “Should I read this?” to “I am gonna ask for a copy”. Like I said, perhaps I was meant to read it.


Before I published the interview on my blog, I posted a note about it on my Facebook page, requesting anyone who had any questions for Robert, a rape crisis counselor, to get in touch with me. In the post itself, I encouraged people to leave any questions they had. I even provided Robert’s contact information, in case they were more comfortable approaching him directly. I felt the work that Robert did was not only important, but could also help so many people in need. I promoted the post on every possible channel I could, more than any of my other posts, in fact. It was even a top post on Indiblogger, a network for Indian bloggers. But shockingly, there were no comments left on the blog, and no one got in touch with me about it either (cos one way of looking at it, why would they talk about something so sensitive in the comments section of someone’s blog).
This silence bothered me more than anything else. I was not expecting a thunderous response, of course, but the silence only proved to me that people still wanted to suffer in it. I thought another way of raising awareness about these issues would be to have guest bloggers on my blog. In this book, Robert, and several survivors who’ve shared their stories in this book have repeated several times that “Most perpetrators are men, but most men are not perpetrators.” Keeping this in mind, I decided to invite a male blogger to write about this topic. A former classmate and fellow blogger has often spoken about sexual assault, and issues that are so prevalent today but not taken seriously enough. I texted him with my request, but received no response. This only strengthened my belief that people simply want to brush it under the carpet.

A few weeks ago, I wrote a short story titled A Rebirth. The story is set in the early 70s, but if you read this article about what happened two days (that’s right, two days) ago in Tamil Nadu, India, you’ll know the situation isn’t very different even now.


I could go on, but this post isn’t about that. This post is about this wonderful book called To The Survivors that has left a very profound impact on me. To say I was affected deeply while and after reading it is an understatement. There were moments when my eyes watered, and there were moments when I was filled with a sense of hope. To The Survivors is not a story about a legal body nor does the author mention the real name of the institution he works with, lest it be perceived as a promotional document of some sort (he’s assigned it the fictional title of “The Healing Place”). It is not a book that in any way preaches or tells you what to do. Most importantly, it does not call anyone a “victim”. Anyone who has suffered sexual assault is referred to as a “survivor”. That in itself is an empowering thought.

Several survivors have shared their stories in this book. They have shared how their lives were, until a certain point, moulded by what had happened, and how they overcame their struggles. There are stories by men and women, and some have related stories of being abused as children. Men often don’t disclose they were assaulted. In fact, women do not either, due to various reasons that I need not reiterate, but men tend to disclose it far lesser. Perhaps they should, whenever they feel the time is right. I am not saying they should approach a counseling centre necessarily (the book also emphasizes this point), but anyone they feel comfortable with.

There are stories of victim blaming, which are the hardest to read, because in any case of sexual assault, the easiest thing for some people to do seems to be blaming the person who suffered the assault, rather than the one who did it. It logically makes no sense to blame a survivor, but it is done – everywhere, in nearly every case. Victim blaming is not acceptable. Period.

There is a poem, shared by one of the survivors, Shira, that will remain with me for a long time. It’s called The Changeling’s Lament, and it talks about how a woman is “expected” to behave and “be a lady” and “be proper” and how the poet does not want to conform to these rules. I could relate to this poem, as I am sure a lot of girls and women can as well.

The book ends with a chapter on forgiveness. It ends with each survivor (whose stories are in this book) sharing their thoughts on what forgiveness means to them. I am rather humbled by the thought that such people walk amongst us who have the heart to forgive their perpetrators. They are really brave and are survivors in the truest sense of the word.

I recommend this book to every single person in this world (literally), and I don’t remember the last time I said this about a book (have you noticed how snarky my reviews have been lately?) It may break your heart at places and fill you with rage at others, but by the last page, you will be filled with a sereneness and hope.

Again, I don’t remember when was the last time I did it, but I give this one a rating of 5/5!

Get the book here

If you wish to contact the author, Robert Uttaro, a rape crisis counselor, his contact information is below: 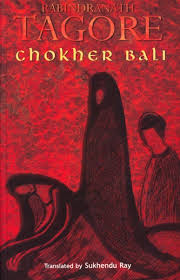 It is strange, isn’t it when a book that’s regarded as a classic fails to have any impact on you save for mild annoyance?

I’d like to believe that Rabindranath Tagore’s Chokher Bali got lost in translation. Rather, I want to believe so. Tagore’s Parrot’s Training still remains one of my favourite short stories of all time, but to my mind the authors of the two can scarcely be the same person.

I bought/started reading this book in 2009, and abandoned it after the first few chapters. Abadoning a book just seems so wrong, unless the book is so bad (cough *50shadesofgrey* cough) so I gave it another go.

Chokher Bali (grain in the eye) is a story about a husband and wife whose lives are turned upside down with the arrival of a young widow, who is far more beautiful and intelligent than the wife. As a result, the husband falls for her. Although she played along, she realizes that this man is an arrogant pain in the places-that-were-not-talked-about-in-the-period-this-book-was-written-in. Chokher Bali is the name that Ashalata (the wife) and Binodini (the widow) give to their friendship (yes, they were friends).

Let’s talk about the characters. Mahendra/Mohin, the husband mentioned above is an insufferably arrogant young man. Spoilt by his mother to an extent that he still throws tantrums like a child. But because he is a grown man, the tantrums are more of the passive-aggressive kind. He falls for Ashalata, a girl meant for his best friend Bihari, at first sight, and because of the power and dominance he has over Bihari, he snatches the girl from him without so much as a “May I?” With Mohin, it’s all “Yeah, this is mine. This too. And that. Plus this.”
Ashalata is a simple girl. Too simple, silly, unaware of the ways of the world. She is such a simpleton that when she finds a friend in Binodini, she tells her the tales of all her trysts with her husband, thereby evoking Binodini’s passions and desires that ultimately lead to the mess.
Binodini, on the other hand, is the one character I liked. She is supposed to be a character with negative shades, but how can you not sympathize with her – rejected by Mahendra (before he married Asha), rejected also by Bihari (who she was thrown to as a crumb when Mahendra rejected her) and then widowed at a young age. Add to that the fact that she considers herself superior to Asha, but sees both the men in the story desire Asha, and not her. It is a frustrating scenario, irrespective of the time the book was written in.

Let’s now talk about the writing, or the translation. The first and foremost – scenes end abruptly for no valid reason! You’re talking about something, say, a conversation for instance, and suddenly – bam – it’s over and we move to something completely unrelated, and you’re wondering, “Ok, but what happened to what we were talking about earlier?”
The women in this book cry all the time. Women – why do you cry so much in this book? Why are you always crying? Is life so hard? Sometimes you cry for no reason at all. Are you that silly? Why are you crying even when you’re happy. Why are your tears of joy also described as something painful that no one would ever want to experience? Binodini, you’re being shown as a strong woman – but you too are too much of a weeper.
We know about Binodini’s “awakened passions” only because of the blurb on the back. As a reader, I know Binodini’s frustrated only because we are told she is trying to flirt with Mahendra, and she does. But her reasons, her anger, her resentment, her regrets are not explored as well as they could have been. It’s rather inarticulate, and we are just supposed to assume, “The woman is pissed.”

It all dwindles to the most frustrating endings of all time. It may have been pertinent to the time it was written in, but if you apply the scenario to a more modern setting, I feel it is unjust and almost cruel. Without giving out too many spoilers, all I am gonna say is to forgive isn’t always divine, or even necessary.

Follow Rain and a Book on WordPress.com
Join 1,505 other followers