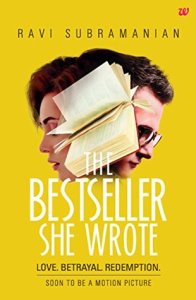 I don’t read a lot of Indian authors. When I say “Indian authors” I mean the commercial, “masala” churners, not the serious crust, whom I simply refer to as authors. I had heard of ‘The Bestseller She Wrote’ because of a Twitter promo campaign, but I did not look it up or anything. I had never read any of Ravi Subramanian’s works prior to this, so I did not know what to expect. So when I received the book for review, my mind was a blank slate.

Well, not entirely; from my first sentence you have probably gathered I do have some preconceived notions about commercial authors. I am especially wary of Indian banker-turned-authors. But I kept an open mind, so as to be able to give this book the fair review it deserves.

Summary: Aditya Kapoor, nicknamed “paperback king”, “rockstar author” and other embarrassing (but seemingly glitzy) things is a 40-something banker and India’s # 1 commercial author. He gives a presentation at IIM-B, his alma mater, where he is insulted by Shreya Kaushik, a student miffed by the fact that Aditya keeps referring to his book as a “product” (I echo her sentiments, by the way). Aditya’s gigantic ego takes a hit and he tells her to read his books before commenting. She does, and becomes an overnight fan. Shreya considers herself to be a voracious reader (she’s not; she only reads bestsellers, and she reads John Green only cos he’s “cute”) She also wants to become an author, and she seduces Aditya to help her become one. It is unclear whether she seduces him for her gain alone or if she is actually in love with him. (Actually, several things are unclear, but I am getting ahead of myself) Aditya is completely smitten, forgetting totally about his wife, Maya and 6-year-old kid, Aryan (could these names be more Bollywoodesque?). No, wait, he does not, because on every other page he tells us he loves his wife. And also Shreya. And also his wife. But anyway. Later, Maya comes to know of the affair and contracts Ebola at the same time. Aditya ends things with Shreya, and begs Maya to take him back. Shreya goes crazy, because of course.

As I was reading The Bestseller She Wrote, the very first connection I made was to an interview of Robert Pattinson, where he says that when he first read Twilight, “it seemed like I was convinced Stephenie was convinced she was Bella.” That is the exact same thought I had. I mean no disrespect to Ravi Subramanian, but it seemed like Aditya Kapoor, the author in this book, and his star-studded life, was what the author aspired to reach some day. At least the first half of the book.

Let’s look at that statement again – when was the last time you read the words “star-studded life” and “author” in the same sentence. It is so far-fetched. There is nothing in this book that convinces me of this.

Next, the writing. The narrative is sparse, the language is rife with Indianisms, repeated stock phrases, slangs in content, and on the whole, it feels like a lazy attempt, like something written in a hurry. With respect to slangs, while they are accepted in dialogue, it’s just poor writing in narrative – unless the book is written in a first person narrative and the character in question needs to describe a certain sort of lifestyle, which isn’t the case here. Slangs when used incorrectly provide unintentional humour. For instance, there was a sentence “Aditya was chilled.” Aditya is not a beer! For crying out loud, what sort of a sentence is that! The dialogues did not sit well with me on any level, because it felt – I don’t know what exactly, but the word that comes closest to describing it disjointed. Also, in dialogue when you want to stress a word, you italicize it, not capitalize it. Come on, this is not Twitter and you’re not a troll.

There are also several inaccuracies in the book in terms of facts; right off the top of my head – there was a mention of a book and they mentioned its author to be Sydney Sheldon. Having read every book by Sheldon between the ages of fourteen and sixteen, I knew there was something wrong here. I looked it up, and yes, it was a Tilly Bagshawe book (the Sydney Sheldon fanfic writer)

This book has 84 chapters, and it’s 390 pages long. I have read books with over 1000 pages that have, like, 19 chapters, filled with substance. This, on the other hand, is well padded out and airy. The characters are not likeable. Actually, no, I have read books where characters are outright evil, and I have had more emotion for them than I have had anybody in this book. This book is just an ego balm to its (dislikeable) protagonist. Everyone is a huge fan of his. There are scenes, which otherwise contribute nothing to the story, written only to show the reader how big of a boot-licking audience this man has. I can’t find myself caring for any of these characters, they’re so pointless in the world of literature.

One of the funniest bits is, the author has briefly mentioned himself in the book. He has also mentioned several of his contemporaries, thrown a bit of shade at Chetan Bhagat (but then, who doesn’t?) and turned Bollywood bigwigs into characters. (Also, a lot of glaring endorsements for several brands, all of which will make this book terribly dated a few years down the line)

On the whole this book is boring, predictable and highly “putdownable.” I can’t think of a single redeeming quality, except that it doesn’t take up too much of your time, 84 chapters notwithstanding. It tries too hard, and that just made me sad. Like the kid whose answers are all wrong, but has a neat handwriting. Although I have never “pity-rated” a book before, I am going to rate it a 2, instead of a 1 for this reason alone.

If you still wanna read it, here are the links where you can buy it from (while I severely judge you):

PS: I just noticed, it’s listed under Suspense & Thriller on Flipkart. Don’t let that fool you.

I am reviewing ‘The Bestseller She Wrote’ by Ravi Subramanian as a part of the biggest Book Review Program for Indian Bloggers. Participate now to get free books!

26 thoughts on “The Bestseller She Wrote, by Ravi Subramanian”