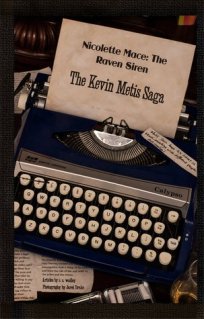 This review is going to be brief. If you’ve been following my goodreads updates, then you probably know I’ve been reading this for what feels like forever! I hate to be the one to say it, but that tells you a lot about the book.

The Kevin Metis Saga, The Raven Siren # 2 isn’t a bad book – as in, it’s not terrible. But it isn’t a good book – as in I wouldn’t recommend it to anyone. Only in the middle of chapter 2 did I realize that this is not one story, but a series of interconnected short stories, featuring Private Investigator Nicolette Mace (Raven Siren), her friend, the cop Fred Barlow, the assassin Ryuu Blade, and Kevin Metis, the antagonist.

The writing style is rough. It does not lend much credibility to either the characters or the plot. Raven, for one, makes sarcastic remarks even when there’s a gun pointing at her (she makes sarcastic remarks even when Fred tells her that his brother died – way to go, girl! Not inappropriate at all!). There’s a scene (chapter 1) at a hospital, where there are a lot of gunshots fired, people die, including a doctor (who happens to be the antagonist’s brother) but no one seems to be bothered. It’s strange – makes you think what kinda security do they have at this hospital.

The next chapter or short story begins abruptly. As a reader, I thought it was a continuation of the first story, but then I realized the first story had ended – but the antagonists will make their appearance in every story. Confuses you a bit, doesn’t it? The pace is fast, too fast; as a result the plot seems to leap ahead, but without much happening in the duration.

In chapter two, Nicolette/Raven meets Mary for a potential case. She decides to investigate the case without Mary sufficiently explaining the matter. Raven loosely assigns the term “suspects” to Mary’s brother and brothers in law without Mary explaining the case. What if they weren’t “suspects”? What if they weren’t involved at all and Mary was just dreaming something up? A PI must not make assumptions without any data. Which is proved a few pages later, where Raven leaves the house miffed with Fred (a PI must not throw tantrums either), reaches the suspects’ hangout and then tells herself that she should have gotten more data.
I consider myself a bit of a grammar nerd, as anyone who reads my blog knows. I don’t have a lot of peeves like most other grammar nerds (I am really forgiving – like God, if you will!) but out of the few that I do have, one is saying/writing “brother-in-laws” when the correct way to write it is “brothers-in-law.”

Raven’s courage in the face of life threatening situations isn’t convincing at all. It’s like she’s too indifferent towards everything. “You wanna kill me? Pfft! Men!” That’s not an actual line from the book; but it reflects Raven’s sentiments up to a large extent. I read the first few pages and felt that the book is trying to sell a certain brand of female supremacy. Yet, I wouldn’t call this book feminist, not at all. Imagine misogyny in reverse – all women sitting and dissing on men – that’s how this book comes across, with Raven trying hard, very hard, to come across as an alpha female. I wouldn’t even say she failed, I was simply too meh-‘ed out by her attempts.

I would describe this book as childish. There’s something very immature, very unplanned-out about this book. I can’t put a finger on it, but it seems like there is just too much happening, too much noise, but all for nothing. Like it’s trying-to-be Nancy Drew but resulting in Dora the Explorer – if Dora was a tantrum-throwing PI.

Disclaimer: PDF copy sent for review by the author. Unbiased and honest review.